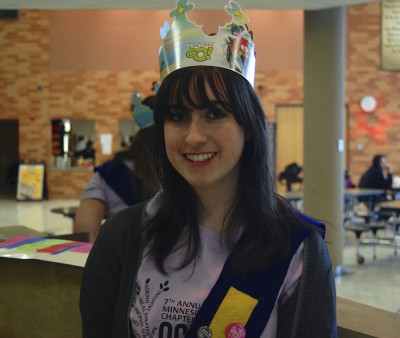 Abby Winston: Queen of the Lofties

LoftPAC president Abby Winston has known plenty of triumphs and tribulations during her four years as an ERHS Loftie, but she’s not complaining about that roller coaster ride, because when she found the Loft, she found friends like no other.

Q: As a student leader of the Loft Stage, what have been your high points and low points this year?

A: My high point of the year was definitely the whole process of Into the Woods. From auditions to the closing of the show, the cast was so dedicated and so excited to make every aspect of the show the very best it could be. The closeness of the cast is like nothing I’ve ever experienced. My low point of the year is a personal one. It was really difficult not being cast in the winter play. Not being in the show made me lose connection with the rest of the program, so I felt like I wasn’t being a very good LoftPAC president. I hope I redeemed myself in the Spring 🙂

Q:  You’ve been deeply involved in theater for the past four years.  What is your absolutely favorite memory?

A: My absolute favorite memory of my four years at The Loft Stage is the hour and a half between when we were told that the cast list for Into the Woods would be posted and the time when it actually was posted. Everyone was on Twitter–actors, pit members, crew members, alumni– waiting for the list. There were many “Agony” jokes and encouraging tweets at each other. The fun on Twitter before the list was posted made waiting for the list a little easier, and really started off the positive musical cast camaraderie that I talked about before.

Q:  From your student perspective, what is the Loft Stage’s greatest strength?  How about its greatest weakness?

A: The Loft Stage’s greatest strength is the talent that we have here. But that is also its greatest weakness. Obviously our amazing talent allows us to put on shows that rival some professional productions, but it also can discourage new people from auditioning and even current Lofties from setting high goals for themselves.

Q: If you could change one thing about the Loft or the Loftie experience, what would it be?

A: If I could change one thing about the Loftie experience, it would be to not take everything so seriously. This is still high school theatre! We can have an incredible production and still have fun- especially during audition week.

Q: Who would you want to play you in a movie?

A: Zooey Deschanel, obviously. Another awkward brunette with bangs who plays the ukulele.

Q: What words of wisdom do you have for the Loft Theater students who will be here next year?

A: My words of wisdom for current and future Lofties is to not let an award affect how you feel about your performance. I know how obsessed we all get about SpotLight during the musical, but please don’t let SpotLight results determine how you felt about your performance. If you were proud of yourself before SpotLight awards were announced, don’t let your award change your opinion of yourself.

SIDE NOTE: It has been such a pleasure leading you guys this year. You guys are my best friends, my biggest supporters, and my favorite people in the whole world, so continue to be amazing, and I can’t wait to see what you do in the future!